We've released all remaining dates over Easter as both short bresaks and full week stays. All vacancies arriving on Good Friday 6th April have been reduced. Click the Special Offers button on the right and scroll down. 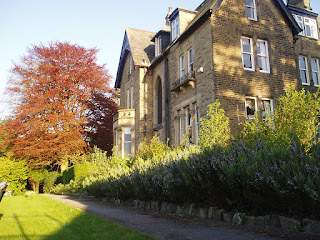 The Dales is back! ITV1 - Mondays 8pm

The new second series of The Dales returns to ITV1 (27th February 2012) and once again, Adrian Edmondson returns to the county of his birth, Yorkshire, to bring us the stories behind life in the Yorkshire Dales.

Spectacularly beautiful they may be - but the Dales are also a challenging environment for the people who live there in some of its remote communities.  Adrian used to spend many of his childhood summers in the Yorkshire Dales with his family (mainly here in Ilkley!), but in this series he meets a number of characters who live all year round there amidst the stunning scenery of landmarks like Bolton Abbey and Aysgarth Falls.

Find out more about The Dales
Posted by Tim Edwards at Monday, February 27, 2012

Behind the scenes of the Bartons' car crash - Videos - Emmerdale - ITV

Behind the scenes of the Bartons' car crash - Videos - Emmerdale - ITV
So poor John Barton didn't survive the spectacular car crash scene filmed here out on Ilkley Moor last month. Find out more from this behind the scenes clip!

1 Where were the first shots (low loader and stuntman) fimed? Just over from Keighley Gate (Whetstone Gate on maps) on the road back across to Silsden

2 Is the drop off from the Cow & Calf Rocks really that big? Yes

3 Can we see where the filming took place? Yes indeed. Ilkley Moor is open access land

4 How long did filming take? 3 nights. We could see that the floodlights were still on at 3 o'clock in the morning! 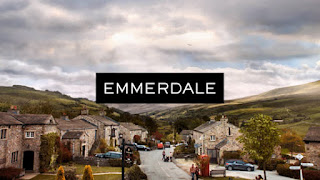 We are open for business and fully intend to remain so. Main roads in the area are open (drive with care) and rail services into Ilkley are operating normally. Local shops are receiving deliveries and pubs and restaurants report brisk trade. We're always prepared for extreme weather here. The boilers are all recently serviced, we have plenty of cut logs for open fires and our 4x4 vehicle is ready to ferry guests up the hill from the station or town centre.


We appreciate that media reports are indicating a severe situation, which is currently just not the case. Of course, the position is different in other areas of the country and extra care and measures such as carrying a shovel in your vehicle, extra warm clothing and flasks of hot drinks are always wise precautions. On the positive side, Ilkley and Ilkley Moor look like Christmas card scenes and snowballs and sledging are the order of the day out here. Have a safe journey! 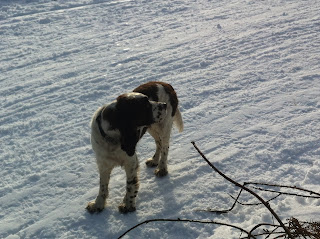 The original Harry Ramsden's Restaurant in Guiseley closed late last year has been saved!  Contrary to rumour, it's not going to become an Aldi supermarket but will stay as an iconic fish and chip restaurant.  The Wetherby Whaler Group  is said to be planning a £500,000 revamp before it re-opens.


Harry Ramsden's opened in 1931 in the art nouveau-styled building. The restaurant once served a record number of portions of fish and chips and also attracted celebrity diners including Margaret Thatcher, who paid it a visit during her 1979 and 1983 election campaigns.

"The famous fish and chip restaurant in Guiseley is the spiritual home of fish and chips in England," said Phillip Murphy of the Wetherby Whaler Group. "It would be a national scandal if it were to close at this time of economic uncertainly. Our investment has saved a Yorkshire landmark and will ensure the tradition of fine fish and chips continues at this important location. The new Wetherby Whaler in Guiseley will be our flagship restaurant."
Posted by Tim Edwards at Tuesday, February 07, 2012 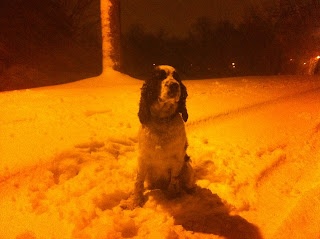 Snowing since noon.  We're almost cut off here tonight.  Guests planning to go clubbing in Leeds had their minibus cancelled.  Everywhere still open in Ilkley though.  Best advice - forget the car, wrap up warm and head down into town on foot!  Pudding dog loving the snow tonight...
Posted by Tim Edwards at Saturday, February 04, 2012