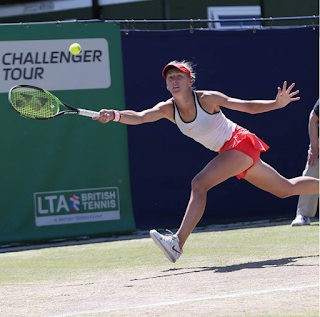 "The Ilkley Trophy is a distinguished men’s and women’s tournament where the top tennis stars from around the world come to compete in both singles and doubles.
Ilkley has been chosen again for the Ilkley Trophy because of its superb facilities coupled with its friendly and ambitious members and staff, and after a long and successful track record of hosting LTA British Tour, ITF, and ATP Challenger events.


The 2016 Ilkley Trophy saw the opening of a stunning new club house and fitness suite, which was part of a £2.5 million investment in the club’s facilities.
Ilkley Lawn Tennis & Squash Club (ILTSC) is Yorkshire's leading tennis club. Established in 1880 the Club occupies a unique location by the River Wharfe in very picturesque surroundings looking up to the panoramic backdrop of the world-famous Ilkley Moor and The Cow & Calf Rocks"
For more information visit the ILTSC website
For more information on The Ilkley Trophy visit the Lawn Tennis Association website
Photo and text courtesy LTA
Posted by Tim Edwards at Thursday, May 16, 2019