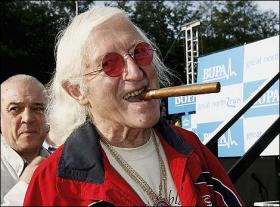 We're all saddened to hear of the death of Sir Jimmy Saville OBE on Saturday at the age of 84.  Sir Jimmy was a local lad - he was from Leeds and lived there (amongst other Yorkshire places) until he died.  He regularly visited Ilkley where his stretch limousine could often be seen parked.  Sir Jimmy was to switch on the Ilkley Christmas lights in just three weeks time. (Who's going to do that job now?)
An instantly recognisable figure, Jimmy Savile had an undeniable impact on British music. He famously fronted Top Of The Pops from the very first episode in 1964.  Sir Jimmy was my idol.  I was only 5 and can clearly remember early episodes on Wednesday night at 6.30pm (TOTP later moved to Thursday) and making sound recordings of the programme on my mum's spool-to-spool Grundig tape recorder.  There were four DJ's who fronted TOTP in turn - David Jacobs, Pete Murray, Alan Freeman and Jimmy.  But it was Jimmy Saville's career as a radio personality that undoubtedly helped enshrine the cult of the disc jockey.

Sir Jimmy was also a tireless charity campaigner. It is said he raised more than £40 million for good causes - especially Stoke Mandeville Hospital (where I was a patient once - everyone knew him there!). 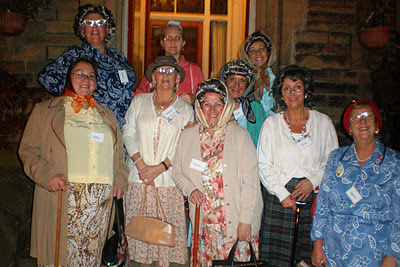 What we had thought had been a quiet group of young women staying in The Old Gallery - suddenly appeared on the doorstep, transformed into a much older looking set!  They were dressed in fantastic outfits and heading down into town with twin set and pearls and handbags ready!  Whether our girls were going to be content with half of milk stout is very doubtful though!  As our photo shows, they attracted more than a few passing glances!

"We can't thank you enough for making the weekend such a memorable one. Your hospitality is fantastic, and the wine, cake and other goodies just added the final touches to our cottage stay. We thoroughly enjoyed winding down in the hot tub and the views from the roof terrace are amazing. We will definitely be recommending Westwood Lodge to all our other friends, and hopefully it won't be too long before we meet again. Thanks a million!"  (Debra)