Bradford has been named Curry Capital of Britain for a second year running. 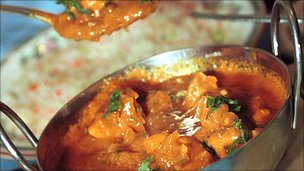 The city is said to have "hung on to its title by the narrowest of margins" after receiving the same number of points from the judges as Glasgow.

The title went to Bradford because the city received a higher number of votes in the public poll.

Organiser Peter Grove said Bradford was "Curry Central - they eat, sleep, breath and export curry and it is part of the city makeup."

"Well done to everyone who has helped Bradford retain the Curry Capital of Britain crown. A great achievement by some great restaurants."
Posted by Tim Edwards at Monday, October 29, 2012