Nightime filming has been taking place this week for what is said to be a huge Emmerdale story to be aired later in February.  The Yorkshire TV team have been filming dramatic scenes on night shoots on Ilkley Moor until 3am.  Although they have been keeping exact details of the stunts under wraps for now, it is rumoured locally to involve some sort of major mock car crash.  An insider reported "it's a top secret stunt - they've got a stunt crew, fire engines, paramedics on stand-by. They're really big scenes coming up in about six weeks' time which are top secret. It's going to be big."

Certainly, there have had some very powerful searchlights up there!

Filming has also been reportedly taking place on the moors above Silsden and Riddlesden.

An Emmerdale spokesperson recently confimed "It's a big dramatic storyline that will be on screen in February. It does involve a big stunt so we've had paramedics and fire crews." 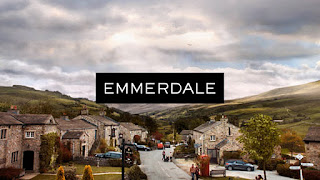 Lots of folk in Ilkley and across the Yorkshire Dales will be saddened that Fresh Radio (formerly Fresh AM and originally Yorkshire Dales Radio) has ceased broadcasting tonight with the frequencies to be taken over by the big UKRD Group who run Stray FM.  For the past few years Fresh has broadcast from Broughton Hall (well the business park there) but before that it came from what looked like a caravan in the centre of Skipton.  We understand that Fresh will be rebranded as Stray FM taken over as part of an enlarged area across Harrogate.

Since 2007 Ilkley has enjoyed Fresh Radio in FM Stereo from a transmitter in Ben Rhydding.  OK, sometimes it went down and it was rumoured at one stage that the transmitter had been turned off due to unpaid bills (under previous ownership).  But we enjoyed Fresh!  It was friendly.  It was enjoyable.  It was local.

Annie visited the studios to collect a prize she had won on the breakfast show, last summer.  Even aged 10, she invariably correctly answered the breakfast trivia quiz and regularly texted the answer whilst eating breakfast!  The first we would know was when her name was read out as the winner!.  At the Fresh studios, she met Head of News James Wilson (I think he WAS Fresh Radio news!) and made very welcome.  We were just amazed how low-key everything was - just three folk and that included the afternoon presenter and someone selling on air advertising! 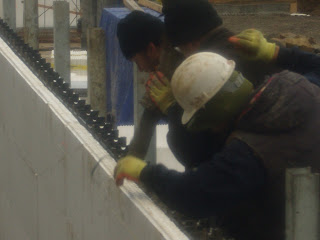 Work continues on our new cottage through the winter.  The green oak timber frame was dropped in just before Christmas and more eco-polystyrene walling is being added throughout January.  Next it will be the grass roof and starting work on the ground source heating supply.

The work is having very little affect on guests staying at Westwood Lodge and we continue to be fully open throughout the winter months.
Posted by Tim Edwards at Thursday, January 05, 2012