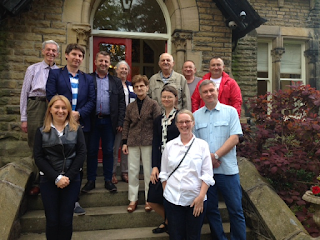 A group of Polish visitors from the town of Marki near Warsaw have made a pilgrimage to Ilkley to seek out their historical roots. Their fascinating story began in 1883 when three Bradford industrialists: Edward Briggs formerly of Westwood Lodge, John Briggs of Hebers Mount and Ernst Posselt long-resident of Victoria Park, Shipley built a large worsted mill and workers’ community in Poland, which the Bradford Observer described in 1886 as ‘a second edition of Saltaire’. (Saltaire is a nearby Victorian woolen village built by Sir Titus Salt and now a UNESCO World Heritage Site)

The last Markians to visit Yorkshire were 100 Polish girls, sent by Briggs-Posselt partnership to learn factory skills in 1883. Among this week’s group of Marki town councillors and history aficionados was Marek Borkowski whose grandmother was among those early workers at the Polish ‘Bradford Mills’ near Warsaw and Antoni Widomski, president of Marki’s Volunteer Fire Brigade (inspired by the British industrialists’ Fire Watch est. 1884), along with volunteer fireman Dariusz Chmielewski. The visit to Yorkshire was instigated by town councillor and esteemed Marki historian Zbigniew Paciorek and the leader of Marki’s town council, Tomasz Paciorek. The group was guided by Ilkley resident, Dr Sarah Dietz, who will talk about her book British Entrepreneurship in Poland: A Case Study of Bradford Mills at Marki 1883-1939(Ashgate: 2015) at the Ilkley Literature Festival in October.

The Polish party began their visit to Yorkshire with a tour of the Briggs’ Bradford factory, Briggella Mills, by the current owner Chaker Chamsi-Pasha. The Victorian mill is one of very few in the city still producing worsted cloth for a thriving export business today. Members of the Saltaire History Club warmly welcomed the Marki delegation on Wednesday when Trevor Hart showed the group round the World Heritage Site and Maggie Smith talked about her research Polish Journeys which explores the lives of Saltaire’s Polish employees. Finally, joined by Kate Brown of Ilkley Civic Society, Tim Edwards welcomed the group to Westwood Lodge in Ilkley, the former home of Edward Briggs; founder of their Polish town.

Marki has a street named after the Briggs brothers (Braci Briggsów) and the Poles were keen to compare Westwood Lodge with their own ‘Little Palace of the Briggs’ (Pałacyk Briggsów) which has its own fascinating history not only as the industrialists’ residence, but also as a strategic military base during the Battle of Warsaw in 1920 and latterly as a school. They were delighted by the spectacular views of Ilkley from Westwood Lodge’s roof terrace and showed their warm appreciation for the delicious afternoon tea provided by Paula Hunt by singing some traditional Polish songs.

The people of Marki have always cherished their historic links to Ilkley and Bradford, now town councillors, Tomasz and Zbigniew Paciorek hope very much to revitalise the connection and show that the spirit of cooperation and shared history between Yorkshire and Poland dates from long before the war.
Posted by Tim Edwards at Thursday, June 25, 2015

ALL RESTAURANTS ARE CURRENTLY CLOSED but these were the Top 20 Places to Eat as chosen by YOU!