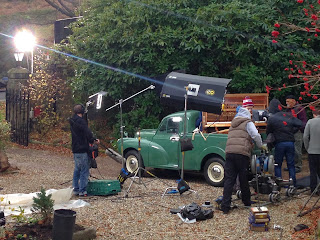 The sights and sounds of an early 1960's Morris Minor van were alive at Westwood Lodge today, as we headed back 50 years!  We've become a popular venue for period filming - partly because we have no satellite dishes, modern extensions or contemporary signage.  The 1100cc Minor is a 1963 collectors piece (but with a "D" plate, suggesting 1967) and came to us driven by two keen restoration enthusiasts.
Today's film is being kept a bit hush-hush, but we can reveal it's a period drama involving a young couple and the girl's irate father.  There's also a piano which sadly gets smashed with a sledgehammer!
Posted by Tim at Westwood Lodge Ilkley Moor Cottages at Monday, December 02, 2013 Links to this post