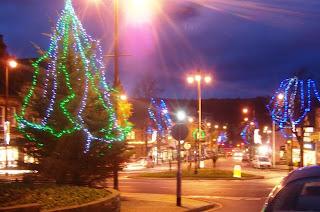 Christmas lights in Ilkley have been switched on by actress Kathryn Apanowicz. The television and radio presenter and partner of the late Richard Whiteley, had a good turnout on The Grove, which was closed to traffic. Born locally, Kathryn Apanowicz is best known for her television appearances in the 1980s, playing nurse Rose Butchins in BBC1 series Angels, and Magda Czajkowski in EastEnders. She has also had minor roles in Emmerdale and Coronation Street, and as a child she was in the film Bugsy Malone. She and Channel 4 Countdown presenter Richard Whiteley, who died in 2005, used to live in nearby Burley Woodhead. Richard was a major supporter of community events, who frequently found time to perform local opening ceremonies and Christmas lights switch-on events. He even became the special guest at an Ilkley art exhibition at very short notice in 2004 after being spotted walking past the venue where Coronation Street stars had failed to show up. There had been plans to ask him to switch on the Ilkley lights in the year he died.
Posted by Tim at Westwood Lodge Ilkley Moor Cottages at Monday, November 22, 2010